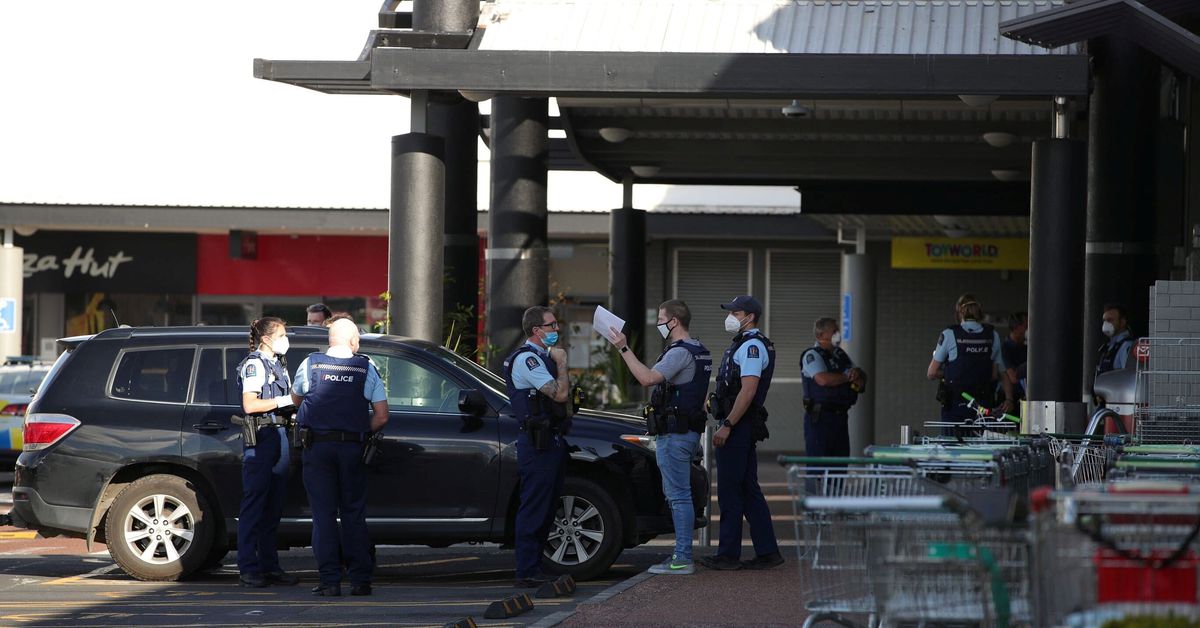 Police respond at the scene of an attack by a man shot dead by police after injuring several people at a shopping center in Auckland, New Zealand on September 3, 2021. Stuff Limited / Ricky Wilson via REUTERS

WELLINGTON, Sept.4 (Reuters) – New Zealand Prime Minister Jacinda Ardern on Saturday vowed to toughen anti-terrorism laws this month after an activist with a knife known to authorities stabbed and injured seven people in a supermarket .

Police shot dead the 32-year-old assailant, a Sri Lankan national who had been convicted and jailed for about three years before being released in July, moments after he launched his stabbing wave on Friday.

Ardern said earlier that the man was inspired by the Islamic State militant group and was under constant surveillance, but could no longer be kept in prison by law.

“I pledge that as soon as Parliament resumes, we will complete this work – that means working to pass the law as soon as possible, and no later than the end of this month,” Ardern said at a conference Press.

The Anti-Terrorism Legislation Bill criminalizes planning and preparation that could lead to a terrorist attack, ending what critics have said is a loophole for conspirators to remain free.

But Ardern said it wouldn’t be fair to assume that the stricter law would have made a difference in this case.

“He was a very motivated person who used a visit to the supermarket as a shield for an attack. It’s an incredibly difficult set of circumstances,” she said.

Ardern said the assailant came to the attention of police in 2016 because of his support for a violent ideology inspired by the Islamic State.

Police were following the man as he entered the Countdown supermarket at New Lynn Mall in Auckland. They said they thought he had gone shopping, but he picked up a knife from a rack and started stabbing people.

Police said they shot him within one minute of the attack starting.

Ardern said the man arrived in New Zealand in 2011 on a student visa and was not known to have had extreme views.

He came to the attention of police in 2016 after expressing sympathy on Facebook for attacks by activists, violent war-related videos and comments advocating violent extremism.

In May 2017, he was arrested at Auckland Airport where authorities believed he was on his way to Syria. He was charged after restricted publications and a hunting knife was discovered at his home but was released on bail.

In August 2018, he bought a knife again and was arrested and jailed. He was released into the community in July this year when surveillance began, Ardern said.

Ardern was briefed on the case at the end of July and again at the end of August and officials, including the police commissioner, have raised the possibility of speeding up the amendment of the anti-terrorism legislation.

Ardern said she wanted to explain why the assailant had not been deported but could not as it would violate the court’s suppression orders, which also prevented her from identifying him, he said. she declared.

But she said she didn’t intend to name him anyway.

“No terrorist, living or dead, deserves his name to be shared for the infamy he sought,” she said.

New Zealand supermarket group Countdown said on Saturday it had removed knives and scissors from its shelves while examining whether it would continue to sell them. Read more

“We want our entire team to feel safe when they come to work,” said Kiri Hannifin, Countdown chief security officer, in a statement.

Other supermarket chains had also removed the sharp knives from their shelves, media reported.