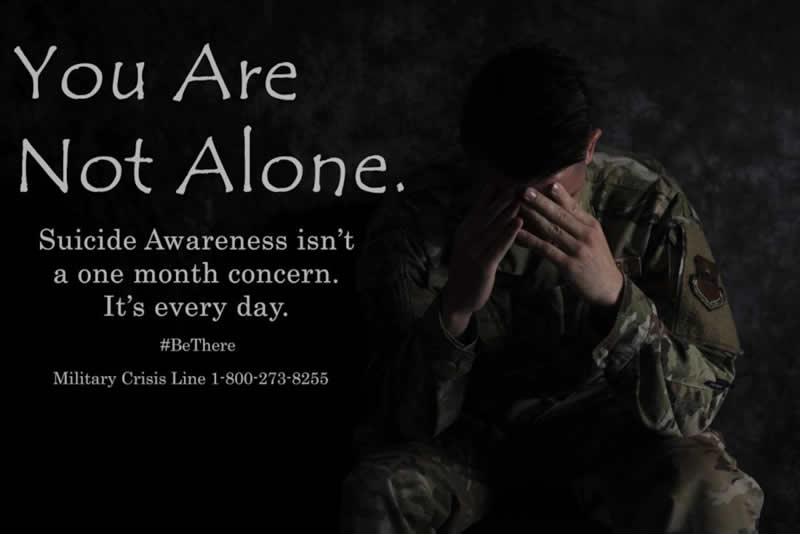 Washington, DC- (ENEWSPF) – The Department of Defense (DOD) released its second Annual Suicide Report (ASR) which showed 498 military personnel died by suicide in the 2019 calendar year. The Department has said in a statement that he is committed to the health, safety and well-being of service members, veterans and families – every death by suicide is a tragedy.

Remember that suicide is complex. There are almost always multiple causes, including psychiatric illnesses, which may not have been recognized or treated. However, these diseases are treatable.

Service members and veterans in crisis or having suicidal thoughts, and those who know a military member or veteran in crisis, can call the Military Crisis Line / Veterans Crisis Line for confidential support available 24 hours a day , seven days a week, 365 days a year. Call 1-800-273-8255 and press 1, text 838255 or chat online at VeteransCrisisLine.net/Chat.

The ASR for Calendar Year (CY) 2019 presents recent data on suicide for military personnel and their families, and describes current and future efforts underway to address suicide. The report includes the new reporting requirements of the National Defense Authorization Act for fiscal year 2020 and represents the Department’s continued commitment to provide timely information on this critical issue and transparency of our efforts.

“The loss of every life is heartbreaking, and every suicide bears a deeply personal story. Every suicide has a vast impact on families, friends, peers, the military community at large, and the nation as a whole. Said Dr Elizabeth Van Winkle, Executive Director of the Force Resilience Office. “Preventing these tragedies is one of our top priorities, and we are working to help all members of the department understand that if they feel alone, they are not. The Department offers a variety of resources, including confidential options, to help members cope with life’s inevitable challenges.

Dr. Karin Orvis, director of the Defense Suicide Prevention Office, added: “Collaborations are essential to prevent suicide; we must continue to collaborate on research, data sharing, outreach and other key efforts with other federal agencies, nonprofits and universities. We will also continue to take a focused approach to program evaluation to assess existing policies and programs, as well as to implement, where appropriate, evidence-based initiatives gathered from evolving science. on suicide prevention. We still have a long way to go, but we will not relax our efforts. We owe it to our military and our families who defend our nation. “

In 2019, 498 soldiers committed suicide. The ASR for CY 2019 shows that – considering the total number of military personnel in the military each year – the suicide rate of CY 2019 for the active component is statistically comparable to CY 2017, but is not going in the right direction; while the Reserve and National Guard rates are statistically lower than in 2017. Longer term, rates have increased in the active component since 2014, while remaining statistically consistent for the Reserve and the National Guard between 2014 and 2019. We see the subsequent risk for young people and enlisted people. Military suicide rates are comparable to the adult U.S. population, after controlling for age and sex, for the active component and the National Guard, and lower for the reserve.

The Department uses internal and civilian data sources to determine the suicide deaths of military family members. The ASR includes CY 2018 data as it is the most recent annual calendar data available. In CY 2018, 193 military family members committed suicide. The ASR shows that the CY 2018 rates are consistent with the CY 2017 rates. Military spouse and dependent rates are comparable to or lower than the rates for the US population, after controlling for age and gender. except for male spouses which is higher.

“Suicide rates among civilian populations are increasing and the military community is not immune to these challenges,” said Dr. Orvis. “We are implementing a comprehensive public health approach to suicide prevention that also targets our military population of greatest concern – youth and military personnel – while continuing to support our military families. “

Over the past year, the Department has developed and started piloting a number of new education and training programs for youth and enlisted military personnel, improved access to resources for members of the National Guard, improving program evaluation efforts, and increased support for military families, such as training more than 2,000 non-medical military providers to provide advice on accessing and safely storing lethal assets to military personnel and their families.

Based on the findings of this year’s report, the department is focusing on flight training – for military personnel, especially youth and military, as well as military spouses – to address the most common concerns about help seeking and encouraging help seeking early on, before life’s challenges become overwhelming. New efforts are also aimed at addressing common risk and protective factors with an integrated approach to violence prevention. In addition, the Department will target educational programs and resources to teach spouses, chaplains and students of DOD schools about risk factors for suicide, encourage help-seeking, and promote the safe storage of lethal means.

At this time, it is too early to determine whether suicide rates will increase in AC 2020. Although quarterly suicide tally is publicly available on www.dspo.mil/QSR – caution should be exercised when examining changes in the number of suicides over time, as counts do not take into account changes in population size or do not allow sufficient time for investigations to essentials determine the cause of death. Therefore, what may look like an increasing trend may not be statistically significant once all investigations are completed and the Department performs the necessary analyzes.

The more of these signs a person, the greater the risk. The warning signs are associated with suicide, but may not be the cause of suicide.

If someone you know has warning signs of suicide:

This is a report from the Ministry of Defense containing information from https://reportingonsuicide.org/.