Ideal for those who need to store lots of data securely, the adaptable DatAshur keeps SD cards locked behind military-grade encryption without any tricky companion software.

While we love USB drives, there’s no doubt there are times when we’ve wished they were a little more secure. That’s why iStorage has come up with DatAshur, an ultra-rugged expandable flash drive with built-in encryption.

The DatAshur SD is, essentially, a very fancy SD card reader, but one that you might be happy to add to your gear bag. It encrypts microSD cards so you can store lots of information in a small, secure package.

Once you run out of space on one SD card, you can switch to another.

The design is quite nice too. The keys on the keyboard are easy to press, even with one hand, and the built-in key fob means you’ll always have it close at hand if you need it.

We also appreciate its small design which allows it to be hung from a belt loop or slipped into a pocket. It has a built-in USB-C connector that you can use to plug it directly into your computer.

However, when plugged into a USB-C port, there is a considerable gap between the flash drive and the USB-C port. Not only does this make it look like the flash drive isn’t properly installed, it’s also aesthetically unappealing.

The manufacturer includes a USB-C to USB-A adapter if you need to connect to a USB-A port, although we’re not a huge fan. Additionally, the adapter does not fit inside the DatAshur case, making it easy to lose.

If the DatAshur SD is stored in its pouch, iStorage claims that it is crushproof up to 2.7 tons and drop resistant up to 12 feet. We dropped the flash drive on the floor from a few feet high and had no problem accessing the data later.

It is also IP68 rated, making it capable of being submerged in up to 5 feet of water for 30 minutes. It can also resist dust, dirt and sand.

There is a downside – only iStorage microSD cards are compatible with the DatAshur SD. You won’t be able to use the storage you want.

Setting up the DatAshur SD is relatively easy, provided you follow the steps in the included manual. However, it’s best to set aside a quiet part of your day when you can do so without distractions, as the process is a bit cumbersome.

We also suggest that you keep the manual in a safe place. If you don’t use the flash drive regularly, you may not remember the particular method you need to follow to enter your PIN.

Users will be prompted to create a PIN to access information on the SD card. The PIN can be made up of numbers between 0 and 9, and an included shift key allows users to add additional combinations. For example, 3056843 is different from 305(shift)6843.

User-created PINs also cannot contain repeating digits or be sequential. This excludes easy-to-guess codes like 1234567 or 88888888.

You won’t need to use companion software to read or write content to the DatAshur SD, or set up encryption, as it handles all of that work for you.

Once you enter the pin code, it will work like any other flash drive.

When plugged into your device, the reader remains invisible until you enter the code. If you shut down your Mac or disconnect the flash drive, it automatically locks. 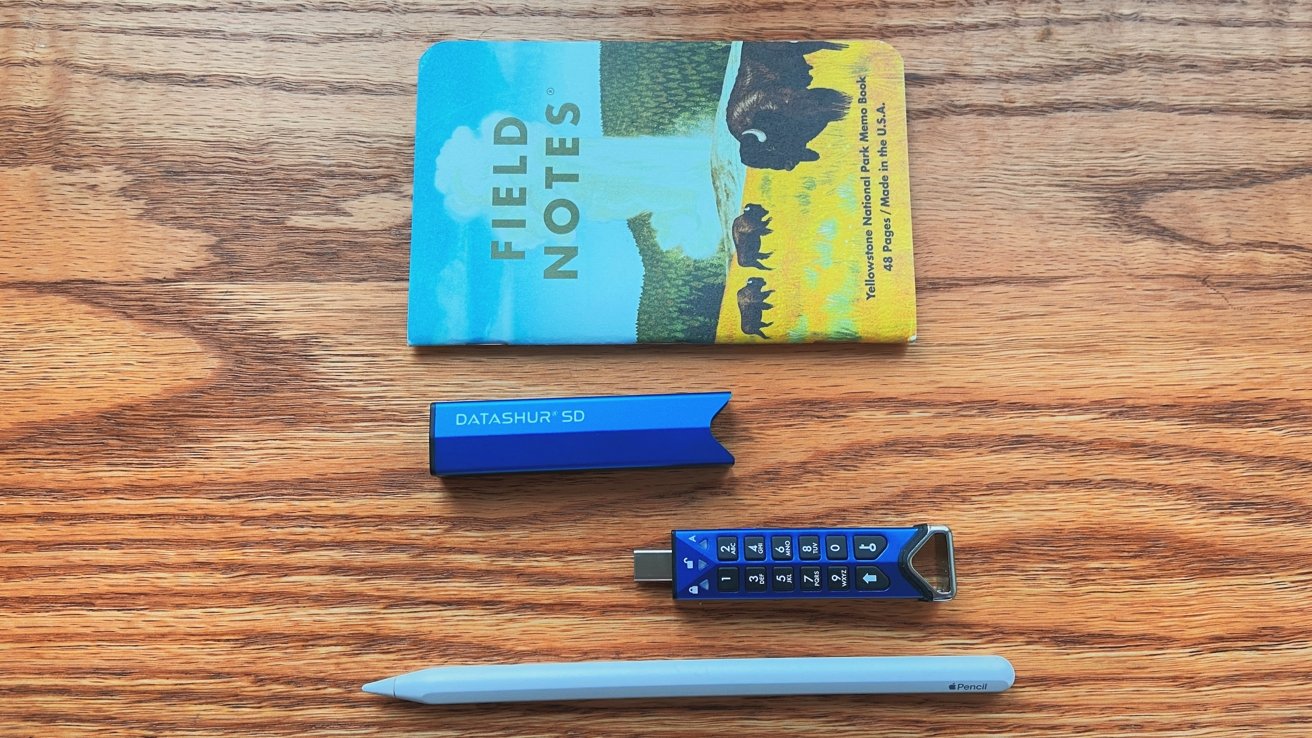 And if you need to, you can also set up a self-destruct pin, which quickly destroys the encryption key and all data stored on the SD card.

Users can also install an operating system on the DatAshur SD and boot directly from it. 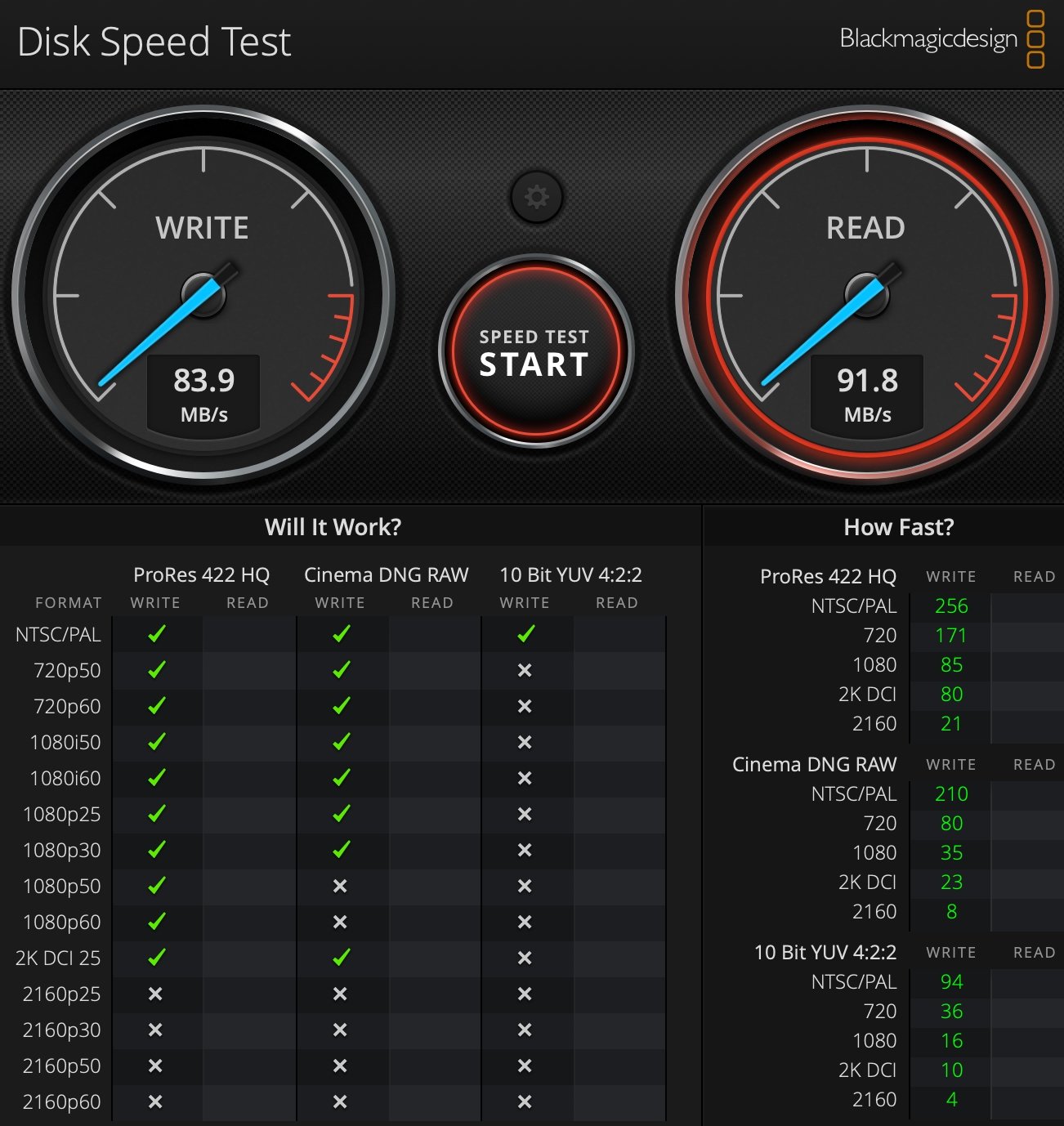 In tests using a 24-inch 2021 iMac M1, it topped both of those numbers with a read speed of 91.7MB/s and a write speed of 83.9 when tested using the BlackMagic’s disk speed test.

For most users, this will suffice. After all, the main selling point of the DatAshur SD isn’t blazing speed, it’s the built-in encryption.

While obviously not everyone will need the DatAshur’s built-in security, we think it’s a great option if you regularly need to access protected data across multiple machines.