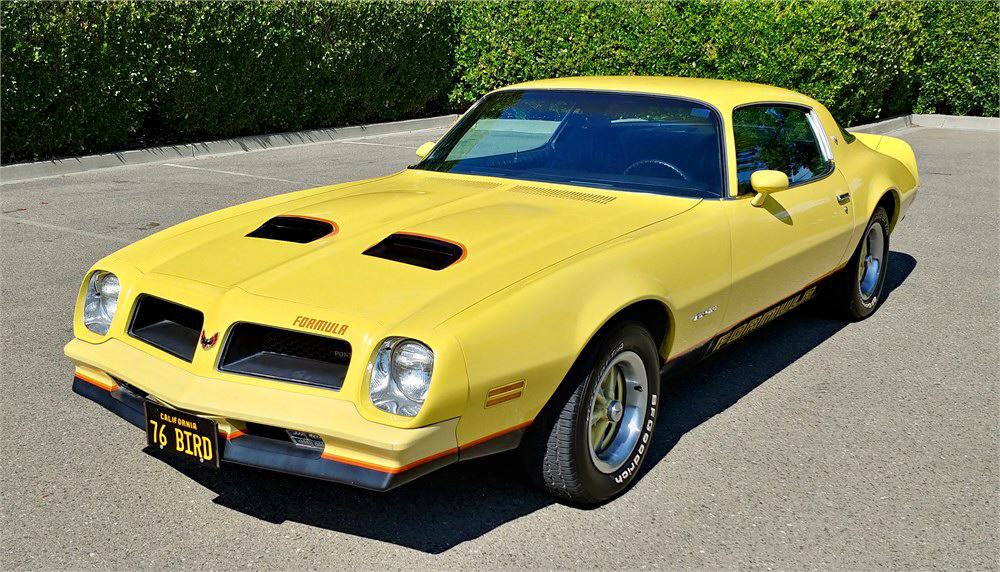 One of the highlights of the Michigan auto show calendar is the annual Orphans Car Show in Ypsilanti. With the exception of the Chevrolet Corvair, which was built at the nearby Willow Run assembly plant, the event is limited to vehicles produced by automakers that are no longer in business.

Perhaps inspired by attending this show for many years, my journey through the record on AutoHunter, the online auction platform driven by ClassicCars.com, features a trio of auto orphans.

Vintage vehicles still belonging to the original purchaser are rare, and this 1976 Pontiac Firebird Formula 400 is one of them. Yes, it has driven over 121,000 miles, but calculating the age of this car, it comes down to less than 2,700 miles per year.

With the exception of the driver’s door, where some bodywork was done 20 years ago, the paint is original, as are the “Formula” decals. The driver’s seat has been re-upholstered, while the seller reports that the rear seats have hardly been used.

The California car is powered by its original 400cid V8 engine, paired with a 4-speed manual gearbox manipulated by a Hurst shifter. The engine exhales through slanted pipes just below the quarter panels rather than under the rear bumper. The seller notes that the car’s original fuel tank and catalytic converter have been replaced.

The car came with an 8-track audio player, but this was replaced by a digital system with a vintage look. The car has factory air conditioning which needs to be recharged.

Not only is this a latest generation 1988 Pontiac Fiero, but it would have driven less than 24,000 miles since it was brand new.

There were issues that prompted General Motors to ditch the mid-engined sports coupe from Pontiac, but these had been resolved by the car’s final year, although the Fiero’s fate had already been decided. As was too typical of GM at the time, the car was finally okay, but production stopped nonetheless.

As GM unplugged the plug, a Fiero fan sent a letter to the editor of AutoWeek magazine, a poem that began with “Fiero, Fiero, you left us too soon…” The poet was right, and so was the car. , finally. TEAR

This Fiero is fitted with a rear-mounted 2.8-liter V6 engine, which was updated for the 1988 model year, and is mated to a 5-speed manual gearbox. The seller has owned the car for 5 years, during which time the car was fitted to new alloy rims (and is sold with the original 15 inch rims).

The car is equipped with air conditioning, power windows, a removable glass sunroof, a dealer-installed luggage rack, and an AM / FM / cassette audio system, although the seller notes that the sound quality from the front speakers is poor.

The AMX looked a lot like the AMC Javelin, American Motors’ answer to the Ford Mustang and Chevrolet Camaro, but it was built on a shortened chassis and powered by a 390cid V8, so it looked more like a Shelby Cobra. and a simple Mustang.

This AMX has won awards at national AMC owner events and, speaking of owners, has been owned by the same person for 30 years.

The car had been dismantled and stored by its original owner, but this work was done after the seller acquired the property and was carried out by the president of the AMC National Owners Club. The car was originally painted in bittersweet orange but was restored in Matador red. It also left the factory with an automatic transmission, but this was replaced by the original owner.

To see these cars and more up for auction, visit AutoHunter’s full file,